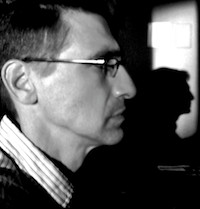 Fletcher's passion for photography began in eighth grade. During the summer of 1976, he was one of twenty high school students selected to study photography at the Pennsylvania Governor's School of the Arts, a highly competitive, five-week summer residential program for artistically talented high school students. His interaction with other students studying photography, painting, sculpture, creative writing, dance, music, and theater convinced him to attend the Rochester Institute of Technology (RIT), from which he graduated with a Bachelor of Fine Arts in fine art photography in 1982.

He began his archival/curatorial career in 1981 while attending RIT through an independent study at the International Museum of Photography at the George Eastman House, learning how a museum used computers to catalog its collections. He was then hired for a summer as a cataloging assistant to sort, organize, and catalog approximately 10,000 lantern slides. He completed two additional independent studies there and was hooked on museums. He then attended the John F. Kennedy University's Center for Museum Studies in San Francisco, obtaining his Master of Arts degree in 1992.

While the focus of his professional career has been as a curator and an archivist, he never completely set his camera aside. He was one of twelve Indiana photographers who founded INVISION: An Alliance of Photographic Artists "to promote and advance the art of photography, and to provide a platform for photographic discourse in order to encourage the artistic growth of its members and to enrich the lives of interested persons through the experience of photography." He has exhibited in group and one-person shows at Through This Lens in Durham, North Carolina, The Photography Gallery and the Artsgarden in Indianapolis, the Association of International Photography Art Dealers (AIPAD) in New York City, and has a photograph on permanent exhibit at the Federal Reserve Bank in Chicago, IL.  He is also a member of the Core Team that organizes the annual Click! Photography Festival held in the Triangle.